A New Kind of “Gold” in Summit County 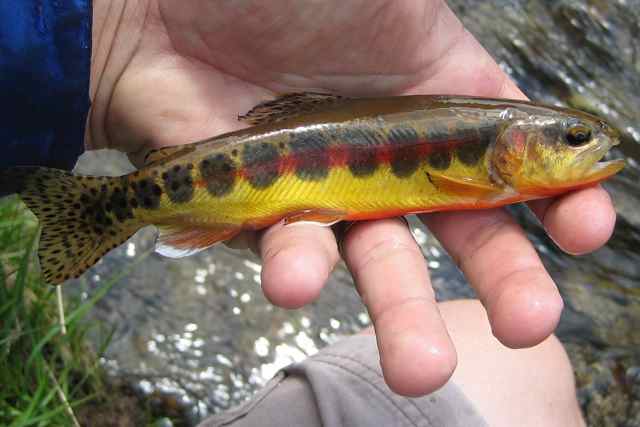 Anglers in Summit County will have a new fishing hole to visit this year, as Old Dillon Reservoir is expected to fill for the first time since completion of a $7 million expansion project that will help bolster the town of Dillon's water supplies.

And within a couple of years, eager fishermen will also be able to chase a new quarry in the small reservoir squeezed on to a ridgetop between Dillon and Frisco. State wildlife managers plan to stock the reservoir with golden trout, a species native to the Sierra Nevada, where the fish have their own designated 300,000 acre wilderness.

Golden trout are most closely related to rainbow trout, and in a warming world, they may be a good choice for Colorado streams, since they can tolerate daytime water temperatures of up to 70 degrees, as long as the water cools at night.

Aquatic biologists said successful establishment of a golden trout fishery could give a little boost to Summit County's fishing economy, drawing people from all over to try and catch a new species. Since golden trout aren't native, they are subject to any special protections, and Ewert envisions a put-and-take fishery, enabling anglers to take their catch home for dinner.

There are quite a few challenges associated with establishing the fishery, starting with getting the eggs from California, which isn't a sure thing. The goldens mostly live in high mountain lakes and biologists have to hike in during spawning season to get the eggs, then pack them out.

If Colorado Parks and Wildlife could get the eggs in the spring, they would be hatched and reared in a hatchery for the summer, then released as two-inch fingerlings in the fall. It take another few years before they reach catchable size.
"It's not something that would be an instant fishery … it would take about three or four years," Ewert said.

Another potential challenge is what might happen to the fish — and angler expectations — in a really dry year, when Old Dillon Reservoir could be drained to near empty. In that scenario, anglers who had been used to fishing for the goldens might get upset and protect the draining of the reservoir.

The key would be educating the public so as not to have expectations set too high, and there may also be a possibility of getting a small pool of conservation water — perhaps 20 acre feet — to ensure that fish could survive the winter, Ewert said.