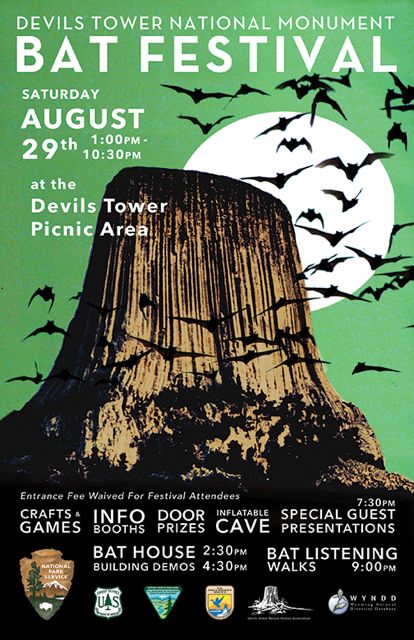 Not everybody loves bats, and some people even hate 'em, but there's no disputing that the flying mammals are an incredibly important part of nature. Along with pollinating many plants, they eat an almost unbelievable amount of insects, including pesky mosquitoes.

The National Park Service will try to increase public appreciation for bats with an Aug. 29 festival at Devils Tower National Monument in Wyoming, featuring demos on building bat boxes, information booths, crafts, and activities for kids.There will also be door prizes, an inflatable cave, and guest presentations.

Bat listening walks will be offered during the evening hours.Visitors can use special detectors to listen to echolocation calls as bats fly overhead.The park entrance fee will be waived for those attending the festival.

The northern long-eared bat, Myotis septentrionalis, is among 11 bat species that have been identified at the Monument. Earlier this year, the northern long-eared bat was listed as a threatened species under the Endangered Species Act. Bats across the country are under siege by a mysterious fungal disease — white-nose syndrome — that has decimated populations across the eastern U.S. and is spreading westward.

"The festival is a great opportunity for visitors of all ages to learn about bats and their habitat, and the importance of protecting them." said Rene Ohms, a park service resource manager."By hosting this festival we hope to share the amazing world of bats with the public and foster support for bat conservation efforts."

The Bat Festival is a partner event, with support from the U.S. Fish and Wildlife Service, the Bureau of Land Management, the U.S. Forest Service, the Wyoming Natural Diversity Database, and the Devils Tower Natural History Association.