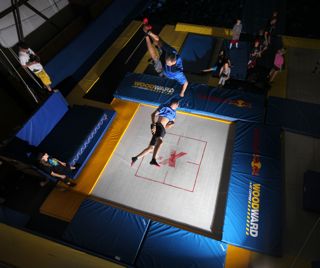 COPPER MOUNTAIN — A Woodward at Copper summer camp giveaway is inspiring kids all over the country to bring their A-game to the table. One snow enthusiast in the Midwest offered a poem about how he hauls ice shavings from a local skating rink to build a snow ramp in his backyard.

Dylan Cook wrote a short poem as his entry in the Woodward contest, describing how he uses his family's minivan to feed his craving, hoping his entry will garner enough votes for a chance to spend a free week in the Colorado high country in between seasons.

Woodward at Copper is currently undergoing a massive renovation but will re-open in June. In the meantime, anyone can submit a photo, along with a short (100 words or less) pitch to win a free week at camp and 50 percent off for a friend. Contest details are online here. You can view the entries submitted so far here.

Woodward's summer ski and snowboard camps feature morning on-snow sessions with afternoons spent in The Barn, where all  synthetic snow surfaces are being replaced with a surface designed for wheels. The new surface boosts jumping progression far beyond just skis and snowboards, to include BMX, mountain bikes and skateboards.

In addition, a new progressive foam pit will be added next to the current big jump line that will include a drop in platform with 2-foot and 4-foot jumps designed for development of beginner park skills. The street area will double in size allowing for full access by BMX, mountain bike, skateboards and park skis and snowboards. Renovations also will include two new viewing areas giving spectators an up-close access to the action.

In addition to the ski and snowboard action, Woodward also offers sessions for skateboarders, BMX cyclists and freeride mountain bikers — and digital media camps to build filmmaking skills and knowledge.